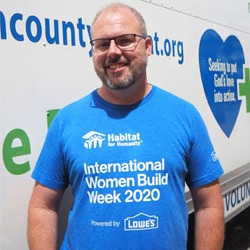 Wayne Sears lives in New Bern NC with his wife Amanda and his son Ryese. After growing up in Oklahoma, he was stationed at Cherry Point in 1996, during his enlistment with the Marine Corps. It didn't take long for Wayne to fall in love with Eastern North Carolina. That is when he decided to make New Bern his home. Inspired by his delight with this area and his desire to see positive changes here, he found his place at Habitat for Humanity of Craven County. Wayne is a ReStore Ambassador. His responsibilities include traveling about Craven County to pick up items from generous donors who have contributed to the ReStore. When he’s not stopping by to pick up donated furniture or appliances, you’ll probably find him studying or playing a game with his family.